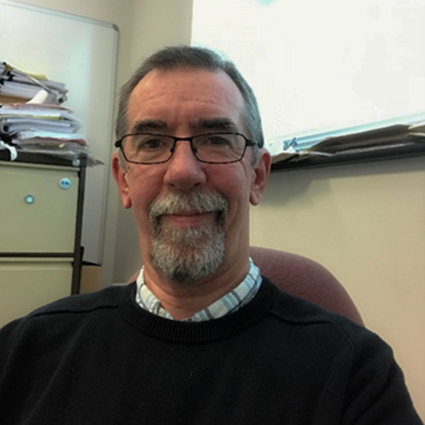 This interview introduces Beyond Antibiotics researcher, Prof. Anthony McHale, who is using sonodynamic therapy, and the combination of ultrasound, microbubbles, and nanoparticles to target microbial infections. His work is aimed at reducing our dependence on antibiotics in the future.

I currently hold a position as Professor of Medical Biotechnology in the School of Pharmacy and Pharmaceutical Sciences at Ulster University.  My research primarily relates to stimulus-responsive drug/gene delivery systems and their translation into the clinic, although my general scientific interests are relatively broad in scope.  More recently I have played a founding role in SonoTarg Ltd., a company aimed at commercially exploiting an ultrasound-responsive, microbubble-based platform for applications in oncology and serve that company as a director and chief technical officer. I have also played a founding role in StimOxyGen Ltd., which is commercially exploiting a nanoparticle-based formulation that can transiently generate oxygen in tumours to enhance current cancer therapies. I serve this company as a director and advisor.

I was born and raised in the west of Ireland and obtained both my B.Sc. (Biochemistry) degree and Ph.D. (Biochemistry) from University College Galway, part of the National University of Ireland (renamed Ollscoill na Gaillimhe, or University of Galway in 2022). On completion of my Ph.D. I moved to a postdoctoral position in Cell Biology, Baylor College of Medicine, Houston, Tx. and returned to Ireland almost three year later to a lectureship in Microbiology at Trinity College Dublin. In Dublin my research focused on microbial enzyme systems that could convert waste materials (e.g. paper) into simple sugars and these were then used as fermentation feedstocks for conversion to fuels such as ethanol.  It was during my time in Dublin that I developed an interest in photodynamic therapy (PDT), a stimulus-responsive approach that had been investigated, on and off, for over a century. Against the backdrop of adverse effects associated with conventional cancer chemotherapeutic drugs, I was fascinated by the potential offered by administering a harmless chemical sensitiser to a patient that could then generate cytotoxic reactive oxygen species (ROS) at a specific target in the body by simply aiming a harmless light source at that target. It may seem obvious, but with many conventional pharmaceuticals, control over the functionality of that entity is lost once it is administered to the patient, whereas some level of control over functionality is retained if an extracorporeal stimulus is applied after administration, to elicit a pharmacological effect. In any case, after spending about 7 years in Dublin, I then moved to the University of Ulster. During my early days at Ulster, and whilst still working on microbial systems for biotechnological applications, I began to further develop my interests in stimulus-responsive systems, and extracorporeal stimuli that I have explored included light, electric fields, and ultrasound whilst the responsive elements of the systems consisted of low MW sensitisers, nanoparticles, microbubbles and indeed target tissues themselves. In terms of my interests in commercial activities alluded to above and in developing my research interests, it became obvious to me that successful translation of research into the ‘real world’, whether that is an industrial process or clinical application, usually requires very significant investment. Whilst there are several avenues one can pursue to obtain such investment; my own choice has been to build a good scientific case upon which a sound commercial case can be based. In my humble opinion, if one cannot make a good commercial case for a technology in the ‘real world’, then it is very unlikely it will successfully translate and more importantly ‘persist’ to provide benefit in the ‘real world’.

What are your current research interests?

Whilst PDT noted above is a prime example of a stimulus-responsive system and affords benefits in targeting tissues such as solid tumours in the treatment of cancer, its clinical application is somewhat limited by its inability to penetrate deeply into tissues. We would all need to be transparent for that to occur! It became apparent to us, and indeed to many others, that ultrasound might provide an alternative and our current work mostly relates to its exploitation as a stimulus to elicit therapeutic effects via several approaches. For example, although ultrasound is not electromagnetic energy, it can elicit effects that are very similar to photodynamic effects, albeit via more circuitous route(s). Recognition of this phenomenon has led to the emergence of an approach known as sonodynamic therapy (SDT) and this approach can be employed to target solid tumours (or microbial infections) that are less anatomically accessible, i.e. deeper in the body. Together with colleagues at Ulster and further afield, I am currently studying the mechanisms that underpin this approach with an eventual view to its clinical translation. Another area of interest and one that I am again pursuing with colleagues at Ulster and further afield, is based on the interaction of ultrasound with microbubbles and nanoparticles. In terms of the former, when bubbles are exposed to ultrasound, they can be made to oscillate in a resonant manner and eventually ‘pop’. Basically they actually implode as a result of inertial cavitation, but I prefer ‘pop’. So, using microbubble preparations, like those used as ultrasound contrast agents in the clinic, we are exploiting this ‘popping’ phenomenon for both drug and gene delivery. In addition to the popping event resulting in deposition of anything that is carried on the bubble shell (e.g., a therapeutic agent or nucleic acid) in a site specific manner, this disruptive event can enhance penetration into impermeable tissues (e.g. solid tumours, infected wound tissues etc.). The phenomenon can also be exploited to get larger molecules (e.g. therapeutic proteins, nucleic acids) across the cell membrane. So, not only can the approach be employed to delivery a therapeutic agent to a target tissue, it can simultaneously ensure that the agent can cross the cell membrane! The latter is key if the therapeutic agent needs to access a cell to elicit its therapeutic effect.  In addition to exploiting microbubbles, I also have an interest in studying nanoparticles as drug/gene carriers; mostly polymeric, but also lipoplexes. One of the key benefits afforded by these as carriers is that they can migrate from the vasculature into interstitial spaces, particularly in solid tumours and once again, this can be further enhanced using ultrasound. Skipping back to our interests in sonodynamic therapy, the reader may be aware that because solid tumours or indeed infected wound tissues have compromised vasculature, they tend to be hypoxic. Indeed, it has long been recognised that a lack of oxygen in tumours renders radiotherapy less effective and is now used as a negative prognostic marker. Yet, we are using sonodynamic therapy to generate ROS. Since oxygen, at least to some extent, fuels this phenomenon, a lack of oxygen would also render this process less efficient. So, another of my interests is in exploiting our microbubble and nanoparticle formulations to delivery oxygen to specific target sites to enhance therapeutic effects.

What’s your interest in AMR

Apart from the obvious catastrophic implications of AMR for humanity, many of the approaches I work on in oncology address significant therapeutic challenges that are, in many ways, similar to those presented by AMR. And so, over the past number of years we have also been exploring PDT and SDT-based approaches using microbial targets. As noted above, SDT is based on the generation of cytotoxic ROS and microbes would also be susceptible to those multifaceted, ROS-mediated cytotoxic effects. So, rather than addressing a specific cellular process with an antibiotic that can easily be ‘evolved around’ by a microbe, the cytotoxic effects elicited by ROS are more generalised and can inactivate a plethora of cellular processes that are less easily avoided by the target microbe. Indeed, using novel sensitiser-based therapeutics developed by colleagues at Ulster and designed to target bacterial strains, we have previously demonstrated that antibiotic-resistant strains of bacteria are susceptible to both PDT and SDT. We exploit ultrasound together with microbubbles to deliver active agents in a site-specific manner and to enhance the penetration of drugs into impermeable tissues. Again, tissue permeability would present a significant challenge in treating infected tissues, since the vasculature may be compromised in those tissues. In addition, microbes generate biofilms that present a relatively impenetrable barrier to therapeutic agents, and we have been able to demonstrate that direct exposure to ultrasound can elicit disruption of biofilms. Based on the above observations, I firmly believe that if one can harness the advantages that are particularly associated with the use of ultrasound, it will be possible to develop therapeutic approaches that will circumvent many of the challenges presented by AMR.

And what’s your role in the Beyond Antibiotics team?

Basically, my role in the AMR project is to further develop SDT as a therapeutic platform for treatment of infection by developing and testing novel stimulus-responsive therapeutic formulations in several infectious disease settings. One key challenge in accomplishing this will be to develop therapeutics that can enable SDT to distinguish between bacterial (or fungal) and host mammalian cells at an infection site so that infection will be eradicated, and the host mammalian cells/tissue will remain untouched. So, a major aspect of our work in this project involves the design and synthesis of sensitisers that specifically target microbial cells. My specific role, together with other members of the Beyond Antibiotics team, is to develop both in vitro and in vivo test systems to be able to assess the efficacy of these novel sensitiser-based therapeutics, again with a view towards clinical translation.

Any interesting hobbies or interests outside of the lab?